“I want to be a writer”, the shy girl explained, after I asked why she was eager to return to her studies, “and I like music and dancing”. I soon discovered young Grace, who I first mistook for being maybe 14 or 15, was in reality approaching her 18th birthday, had now finished her “O” level education (the equivalent of our high school), and was hoping to soon begin her “A” level (i.e. junior college) studies. But for the moment here at the Matugga Home she was helping mentor the younger girls.

“I like to sing,” she replied, “and I like to play the drum.” “I play the drum when the girls dance.” “But we don’t have a drum here, so I play on a pail turned upside down.” “We are even giving a presentation in a few days.”

Images of a young girl pounding on a bucket while other girls jumped around filled my imagination. I had no idea how wrong this image would prove to be.

Being a musician myself (a talent now long dormant), I enjoy encouraging young aspirants whenever I can. On the bus trip back to our guest house that evening I hatched a plan to give Grace the opportunity to play on a real drum by the time the day of the presentation arrived. And sure enough, the very next day, despite a series of wonderfully African changed itineraries, missed opportunities, and unforeseen delays, the lovely Peace managed to get me a fine drum, a lovely African traditional drum, with a cowhide head secured with an intricate webbing of braided cord.

It has been rare in my life to see a young person’s eyes light up as did Grace’s the moment she realized the contents of the large white feed bag I offered to her as a “gift”. “For me?” she asked incredulously. “For us?” “For me and the other girls?” Her smile became even brighter as the realization sunk in. 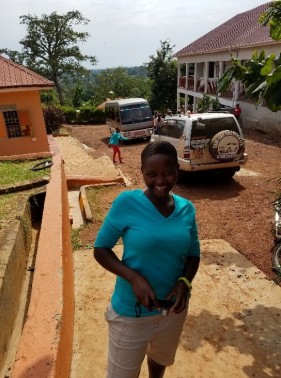 Two days later the day of the celebration arrived. And such a day it was. The children from the Matugga home and the Gateway Youth Ranch joined together for a day of festivities; speeches, singing, dancing and feasting. And to the surprise of us all, the shining star of the event was the very same Grace. The shy, quiet little flower blossomed before our eyes into a self-confident diva. First, she led the crowd in a spirited rendition of the Ugandan national anthem. A few minutes later, she launched into an original poem describing how poverty is sucking the life from Ugandan children.

The program continued with a fabulous break-dancing performance by the boys from the Amahoro Boys Home, and then it was back to our Grace, now leading a group of 10 other girls in a rousing line dance set to modern African music that she had choreographed herself and taught to the other girls. And finally, after yet another performance by the boys, came the crowning event. Grace, in yet another quick change of costume, appeared with her brand-new drum, and with a series of incredibly intricate rhythms, led her dance troupe in an obviously well-practiced routine. All we could say was “Who Knew!”

I think Caleb summed it up best when he exclaimed to me later as we were discussing Grace: “I had no idea!”

I’d like to think the drum helped increase her self-confidence, but I know better. Grace would have shone even with just a bucket. It was just her time to shine. But maybe I’ll take credit for at least an extra beaming smile or two.

The Amahoro Children and Community Team

The Amahoro Children and Community Team

Providing educational and medical services and support to vulnerable children and their communities throughout Uganda.